As the world is shifting towards eco-friendly fuel alternatives, the Government of India is also doing its part by framing environmental friendly policies & regulations and encouraging electric vehicles (EVs) in the country.

While the shift towards EVs is a welcome step by the Government, it is not enough to meet the ever-growing energy demands of the country, which is expected to double by the year 2040. India is expected to receive almost $25 billion worth of investment in the expansion of its gas infrastructure.

In addition to this, India is expanding its domestic refining capacity from 249mmtp to 450mmtp by 2035. While EVs would bear some burden in meeting these demands, the dependence on conventional fossil fuel sources would be significant, in ensuring pleasant growth of all sectors.
In recent years ethanol has arisen as one of the most important alternative resource for liquid fuel and has also fuelled a lot of research in ethanol fermentation. Research on improving ethanol production has been fast-tracking for both ecological and economic reasons, for its use as a substitute to petroleum-based fuels.

According to various researchers, production of ethanol from renewable resources may improve energy availability, decrease air pollution and diminish atmospheric CO2 accumulation. The goal is to bring light on agricultural, industrial and urban waste, which could be used for ethanol production in an eco-friendly and lucrative manner.
Primarily, ethanol production will reduce dependency on foreign oil and will eliminate dumping problem of wastes and make environment safe from contamination.

Ethanol might be a new concept in India, but it has been driving automobiles for nearly a decade in countries like Brazil, US and several European nations.

The advantage of using ethanol over gasoline is that there is absolutely no particulate matter that is released into the atmosphere. The only gases that are emitted are carbon dioxide, carbon monoxide, water (yes H2O) and formaldehydes. In the US, the exhaust gases are oxygenated on their way out to reduce carbon monoxide emissions.

In a white paper on ‘Alternative Fuels for Vehicles’ released recently, SIAM also said that by 2030, the auto industry could make specific vehicles compatible with 20 per cent ethanol (E20)-blended gasoline depending upon sustained availability of fuels with separately labelled dispensing at fuel stations.

According to SIAM, “For gasoline-powered two-wheelers and passenger vehicles, industry will endeavour to make vehicles material compatible with 10 per cent ethanol (E10) and 3 per cent methanol (M3) blends by 2025.” Further, it said, “By 2030, industry could make specific vehicles compatible with 20 per cent ethanol (E20)-blended gasoline depending upon sustained availability of the fuels with separately labelled dispensing at fuel stations.”

While electrification of vehicles will be a major help towards providing energy security and improving environment, India needs to work on other efforts considering the ultimate objective of improving the country’s energy security.

The Government in order to address the concerns of worsening air pollution has decided to move directly from BS-IV to BS-VI pollution norms w.e.f. April 1, 2020. With the introduction of BS-VI norms it aims to reduce the particulate matter and NOx emissions, the introduction of 2G Ethanol, Bio-Diesel, Bio-CNG, and LNG as cleaner alternative options.

This can be the starting for two-wheeler industry where more and more companies and start-ups will be looking to provide green and sustainable mobility solutions across electric, hybrid and alternate fuels with the help of government intervention. 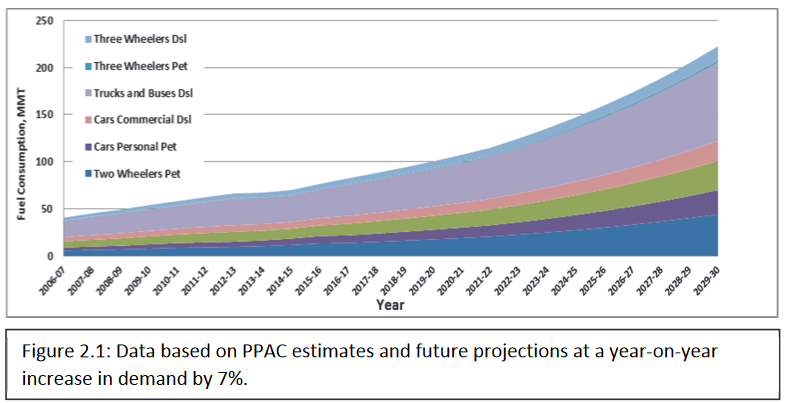 Future of Alternative Fuels in India

As the world is shifting towards eco-friendly fuel alternatives, the Government of India is also doing its part by framing environmental friendly policies & regulations and […]
Do you like it?0
0 Read more

Industry, agriculture and even households, all should work together to tackle current problem using every kind of media platform India is the biggest user of groundwater. It extracts more groundwater than China and the US - the next two biggest extractors of groundwater combined. According to an estimate, about eighty nine per cent of groundwater extracted in India is used for irrigation, making it the highest category using ground water. Household use comes second with nine per cent share of the extracted groundwater followed by industry that uses only two per cent of it. This kind of use is causing continuous reduction in groundwater level in India. Arithmetically, India is still water surplus and receives enough annual rainfall to meet the need of over one billion-plus people. According to the Central Water Commission, India needs a maximum of 3,000 billion cubic metres of water a year while it receives 4,000 billion cubic metres of rain. But the problem is that India captures only eight per cent of its annual rainfall, which is woefully inadequate. A recent report prepared under the ministry of water resources cited rising population, rapid urbanisation, industrialisation and increasing water wastage as few significant reasons for sharp decline in groundwater volume in the country. Farmers, the biggest user of the ground water, should be encouraged to adopt water-conserving irrigation methods. Properly installed drip irrigation system save up to 60-80 per cent more water than conventional systems and results in enhancement of quality and quantity of produce. Time has come when people need to realise that water is not an infinite resource and they need to adopt a responsible, sensitive approach towards this invaluable resource. If we will not save water today, it will not be available to our future generations. As far as households are concerned, they are also not using water sensibly. According to an estimate, 80 per cent of the water, reaching households in India, is drained out as waste flow through sewage to pollute other water bodies including rivers and land. Effective communication is required to make people understand that even if they are not living in a drought-stricken region, they can still contribute to the water conservation campaign. Cutting back on water use not only leads to lower utility bills but also helps conserving a precious resource. Minimizing shower usage and choosing water-wise plant alternatives can also help optimize water usage to a large extent. There are many big and small ways to reduce water usage at home. Industry, agriculture and even households, all should work together to tackle current problem using every kind of media platform like video (Youtube, Vimeo etc.), microblog (Twitter), cross-format (Facebook, Myspace, Google Plus etc.), photo (Instagram, Tumblr, Snapchat etc.), messengers (Facebook messenger, WhatsApp, Viber etc.), blogs etc. along with traditional media and on-ground activities. All need to be galvanised into positive action. Change of public mind-set could play a much bigger role than the State-led infrastructural push. Strategic communication has a key role to play here. When information circulates, it not only improves awareness but also nudges people towards finding solutions. Besides, public awareness could inspire the industry, the relevant civic bodies and the opinion makers to address this rapidly-unfolding crisis and take necessary corrective actions. References : https://timesofindia.indiatimes.com/city/pune/groundwater-table-depleted-in-half-of-maharashtra-in-jan/articleshow/68542070.cms http://indpaedia.com/ind/index.php/Groundwater:_India https://timesofindia.indiatimes.com/india/delhi-at-epicentre-of-global-groundwater-crisis-report/articleshow/68131980.cms